As I mentioned last month, I attended the Spring Congress of the American Academy of Anti-aging Medicine entitled: Brain Awakening. One of the sessions featured Dr. Joseph C. Maroon, Heindl Scholar and Professor of Neurosurgery at the University of Pittsburgh Medical Center. Dr. Maroon spoke on Alpha-GPC and Omega-3 for improving cognition, memory and energy.

Alpha GPC (L-alpha-glycerylphosphorylcholine) is found in egg yolk, red meat and organ tissue, but otherwise is scarce in the diet.

Alpha-GPC is used as a precursor for both acetylcholine synthesis and phospholipid synthesis in the brain. Alpha-GPC as a supplement given either orally or by IV consistently influences brain function for 24 hours after administration.

Acetylcholine is made by combining choline (Alpha-GPC provides choline) and Acetyl CoA.

In 2003, Dr. Moreno showed that using the supplement Alpha-GPC resulted in cognitive improvement in mild to moderate Alzheimer’s dementia.

Mean choline intakes for older children, men, women and pregnant women are far below the adequate intake our bodies need. Humans can produce choline in the liver, but the amount that the body naturally makes is not sufficient to meet human needs.

Choline-deficiency impacts atherosclerosis (through regulation of homocysteine) and neurological disorders.

Choline used as a treatment has been shown to limit neurological damage in stroke patients, improve retinal function in glaucoma and to be beneficial in the treatment of  dementia and head trauma.

In summary, Alpha-GPC enhances memory, boosts energy, is a neuro-protectant (supports the development of new brain cells and enhances the body’s ability to repair damaged cell membranes) and stimulates the production of human growth hormone.

The number of brain connections (synapses) formed depend on levels of three key nutrients: uridine, omega-3 (DHA), and choline.

Both EPA and DHA provide anti-oxidant, anti-inflammatory and gene activation to protect neuronal structure and function. DHA increases the production of LR11, a protein that is found at reduced levels in Alzheimer’s patients. LR11 is known to destroy the beta amyloid protein plaques associated with Alzheimer’s Disease.

Alpha-GPC is a unique dietary supplement that rapidly delivers choline to the brain across the blood-brain barrier. Alpha-GPC has been used clinically for its cognitive benefits for Alzheimer’s disease and dementia.

Dr. Maroon has developed a uniquely formulated Alpha-GPC with an Omega-3 that can provide numerous cognitive and brain health benefits when combined versus taking separately. Based on his experience treating many brain injured patients, Dr. Maroon believes that this formulation not only treats injured brains, but can act to protect brains from developing Alzheimer’s and dementia.

I am very pleased to be able to provide Dr. Maroon’s formulation, called Omax, to my patients. If you are interested in adding this supplement to your current regimen, please ask me about it the next time you are in. 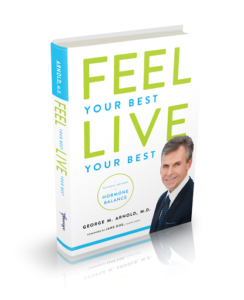 Want to learn more? Pick up your copy of my book, Feel Your Best. Live Your Best., here: http://georgearnoldmd.com/product/feel-your-best-live-your-best-a-natural-return-to-hormone-balance/